http://www.grahamhay.com.au
Reproduced from the Pyre Newsletter, Ceramic Art Association of Western Australia, April/May, 11-12 (emailed copyright approval Wednesday, 14 June 2006 3:59 PM). Some modification of the layout has been made to improve viewing on the internet and to provide links to information sites.

Graham Hay was recently invited to spend a month in the Ceramic Design Studio at Pakistan's peak National College of Arts (NCA), in Lahore.
​ 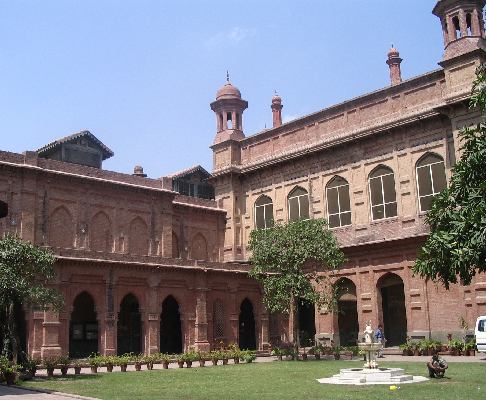 Some of the older National Collage of Arts buildings. Photo: Graham Hay
​Like many others I had media-fuelled concerns about fundamentalist Islamic countries like Pakistan. This was compounded by warnings by the federal Department of Foreign Affairs not to go there, or delay plans to travels to Pakistan. However these concerns and warnings were outweighed by curiosity, the opportunity of having concentrated studio time and learning about another country’s ceramic culture, and reassurance comments from NCA staff, current and past Artists in Residences. Pakistan’s geographic location between booming China and India also offered a close up look at this region. So with the assistance of a WA government grant, I flew into Lahore on 13 March. 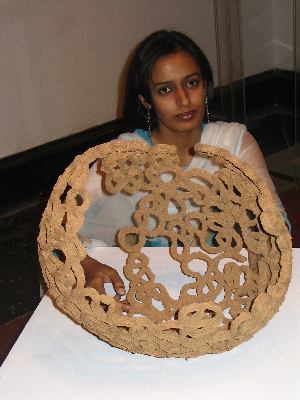 2006 NCA student Rija Saeed with her fired paperclay work Hatching Life" Photo: Graham Hay
I had spent 3 months backpacking in India many years ago, and anticipated a similar experience. How wrong could I be: As a backpacker I had walked through, ate and stayed in the cheaper/noisier side of town and went to all the travel book tourist attractions. In contrast, in Pakistan, I stayed in a modern NCA apartment building, was driven everywhere, shopped at non-tourist supermarkets, ate at good restaurants and worked within the sheltered and atypical art school. In the end I visited no museum, no commercial art gallery no historical mosque.
​
Rather, my engagement with Pakistan was with the living arts, with the future leaders of the Pakistani ceramic and art community. Because of intense national competition for student places at NCA, the ceramic students were from predominately educated, affluent and travelled backgrounds. Some had already started or completed degrees elsewhere. Those without these backgrounds came from families with traditions in tile, functional pottery or more recently, ceramic restoration. Many of the staff were NCA graduates, with postgraduate studies in the east and the west (including Australia). The result was that I was lucky to work with the brightest and most creative people in Pakistan ceramics.
​ 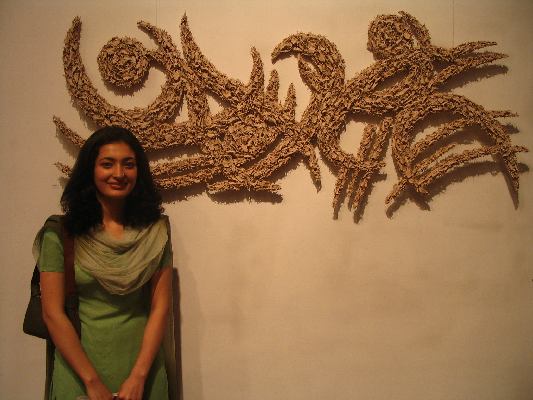 2006 NCA student Shafaq Shamim with her unfired paperclay work Nature". Photo: Graham Hay
The same factors that determine an individual’s success in the arts: talent, aptitude and resources; also determine the health and future of any art form.

Because the NCA was the oldest (over 120 years) and peak art school in Pakistan, then it lobbies for, and can justify substantial government and multinational company support. For example the Pakistan federal and local governments are providing resources and facilities for the NCA to establish new campuses at Islamabad and Karachi. Similarly, 3M recently provided 300 Windows XP computers for the graphic design, architecture, and film and television departments at NCA. This support is not surprising given that graduates from this art education institution dominate the blooming television industry, architecture profession, musical and stage theatre, visual culture, and consequently the hearts and mind of an adult population that is 44 percent illiterate.
​
This institute has always taught both historical and contemporary Eastern and Western art history, theory and studio techniques. Students go on annual field research trips to villages with long ceramic and craft traditions, while visiting artists from the USA, Japan and Europe; were designing the theatre arts curriculum, had heading up the film and television department, and provided examples of cutting edge performance art practice.
​
The ceramics department is currently in an upward part of the cycle that every organisation goes through over time. Ass Prof. Shazia Mirza, the relatively new Head of Ceramic Design Department, is outward looking and experimental in her teaching and private practice, recently exhibited and talking at a seminar in France.
​

Some of the ceramic department staff and students at a Wedding we attended. Photo: Graham Hay
Consequently I encourage the department to experiment with not only adding paper to their clay bodies, but also plant material, foam, cloth, plus processed and unprocessed food. I also fostered a disruption of the traditional linear process of making, drying, bisque, glaze and fire, by encouraging them to substitute glue instead of fire to bind the clay, and introducing techniques of combining fired, dry, soft and liquid paperclay. The concluding formal exhibition featured fired and deliberately unfired paperclay works I believe that fostering an experimental attitude is appropriate in Pakistan, as cheap Chinese imports have flooded the country, even more so than in Australia.

A student told me about a traditional village technique of adding fine plant seed fibre to clay prior to compressing the clay form by beating and burnishing. Time constraints prevented me from investigating this first hand.

I also ran out of time to research and develop a cotton fibre based paperclay. However I did interest a few people in the idea that since Pakistan is a major producer, processor and exporter of cotton, it may have a comparative advantage in the production of a “cottonclay”. (Already Ireland has developed and produces a flax paperclay, by building on its flax-based linen industry.)

After the exhibition opened I travelled with NCA staff to Islamabad (which is a planned city like Canberra) and into the mountainous areas, near the earthquake affected areas.

Overall I thoroughly enjoyed my month in Pakistan and recommend it to others as an invigorating and inspiring experience.
Copy of the colour catalogue is here.

Read about previous Artist in Residence from Australia, Peter Wilson in Pottery in Australia 3/1999).

For more on paper clay: www.grahamhay.com.au/paperclay.html and the NCA see www.nca.edu.pk.
Reproduced from the Pyre Newsletter, Ceramic Art Association of Western Australia, April/May, 11-12 (emailed copyright approval Wednesday, 14 June 2006 3:59 PM). Some modification of the layout has been made to improve viewing on the internet and to provide links to information sites.