Graham Hay outlines studio practices arising from the properties of paper clay and the evolving material philosophy concerning its use.
​Paperclay is an increasingly popular medium with artists, craftspeople, hobbyists and teachers. It offers all the properties of a favourite clay body as well as the opportunity to use techniques borrowed from woodwork, bricklaying, candle making and metalwork.
​
While paperclay has been around for decades as a way to create non-warp clay slabs, it has recently become popular as a ceramic art material because of its dry building properties and pre-firing strength.

Introduced to paperclay by Jaromir (Mike) Kusnik, a ceramic technologist who had been experimenting with it since the early 1980s, I have been exhibiting and teaching paperclay techniques since 1992.

As indicated previously by Caplan, Ellery, Gartside and Gault (see references), any clay can be made into a paperclay by mixing a smooth puree of water and paper fibre into the clay body while in slip form.

​While some artists prefer to use cotton based paper, the local non-gloss newspaper is both satisfactory and inexpensive. I roll it up and push it through the branch port of an electric garden mulcher before covering the paper flakes with about ten times their loose volume in hot water.
​

​The above work illustrate how rods of "Stringclay" can be dipped and stuck together in space to create forms. The base of Pour Out is constructed by cutting plastic paperclay on the wheel into circles, drying and then joining by dipping and sticking with the slip. The body of Tribal Revolt was created by building a dry rod frame and then covering it with whipped cream consistency slip.
​
​A free-standing slip mixer is used to puree it until all individual pieces of paper disappear. A flyscreen or plastic shade cloth is used as a sieve to remove most, but not all, of the water. As a guide, I remove just enough water so that the puree does not slide through my fingers. I mix a third of a bucket of puree with two thirds of a bucket of clay slip, by volume. I have not needed to use this technique for some time, however, because a local clay manufacturer has been producing and selling earthenware and stoneware paperclay at conventional clay prices for the past year.
Slipcasting properties are retained and, provided the paper fibre is sufficiently fragmented into individual fibres, the clay can be used on the potter's wheel. However, extruding fine rods is not possible because the paper fibre disrupts the process. The resulting fibrous clay can be joined conventionally – plastic-to-plastic, as well as radically – plastic-to-dry, or dry-to-dry. While the latter techniques are relatively simple processes, they do involve some unlearning of entrenched habits. The easiest way to grasp the real advantages of paperclay is to make long rods or strips, allow them to completely dry before joining using paperclay slops or slip as the joining 'glue'.

The dry-to-dry building technique is ideal for hot dry climates such as we have in Western Australia. Dry conditions enable rapid drying prior to and during joining. It takes 10 seconds for each join to be made as the dry pieces suck the moisture out of the paperclay slip. If I can pull a dried joint apart, I dilute the joining slip or moisten the dry pieces before rejoining. The resulting good joins are as strong as the paperclay body both before and after firing. Note that precautions for clay dust should be taken when working with dry paperclay.
This work illustrate the delicacy and lightness that can be obtained by pre-forming long and thin parts, drying them and then sticking them together in an upright manner before firing.

The supports for Stacked & Growing were rolled out, bent and dried before attaching to the vessel body with paperclay slip.
​
For Ancient Tribe the tower legs were rolled out, cut and bent before drying and joining. The arches are the bottom lops cut off Stringclay hanging to dry.
​
​I have not wedged clay for four years now because the paper fibre allows air and moisture to easily escape and because dry scraps can easily be recycled. Dry scraps are thrown into a bucket of hot water and within an hour become a joining slip. The slip can also be used to build up texture or reinforce dry paperclay. Because of the increased organic material in paperclay, in summer I include detergent in the water to inhibit bacteria and make only enough slip for a day at a time.
Other changes arising from using paperclay include not using a damp cupboard because I want the individual pieces for a work to be dry before building. The ability of dry paperclay to absorb water quickly means that I soak the work where I need to change it or simply replace the section with plastic paperclay stuck on with paperclay slip. Stocks of dry paperclay parts left over from other works can be stored indefinitely until used in new works. If any resulting work is unsatisfactory it can be pulled apart and quickly rebuilt into a more desirable form. Surface detail has become increasingly important. With conventional clay, any intentional texture is often ruined by handling the soft work. As a result of this, and the functional vessel tradition, smooth surfaces have become the accepted norm. Paperclay enables different textures to be built up on the surfaces of the parts before drying and assembly. These surface textures are not lost when assembling the dry parts into the final work. In addition, joining drips can be left, shortening building times and providing interesting building clues. Whether these methods are only a personal style or an emerging aesthetic associated with paperclay, is currently unclear. 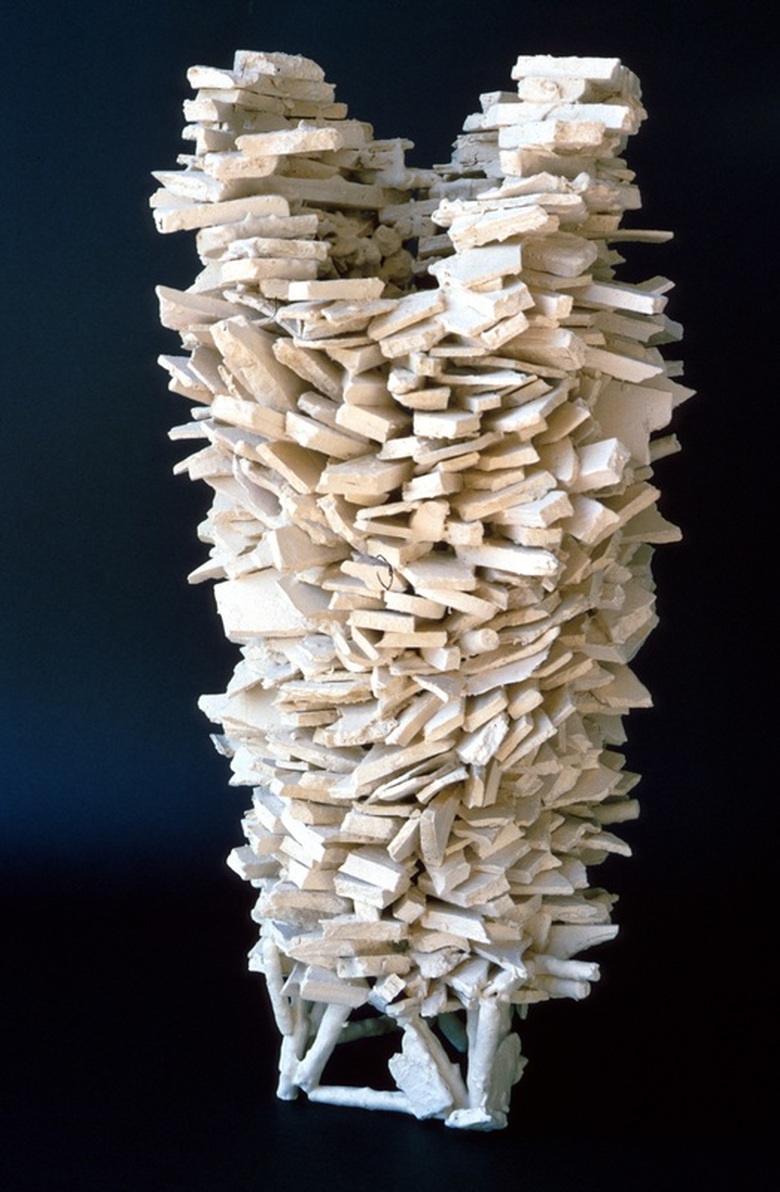 Stacked. 1994. Ceramic Paperclay. 45 x 15 x 15cm. Photo: G. Hay. This work is made from rolled paperclay slab, dried and broken into pieces.
​
More specifically, for artists, paper is essential.  Apart from increasing the strength of a clay body, paper underpins most artistic practices; we use it to record ideas, design and record our ceramic work, as well as do our accounts and correspond with customers, galleries and shops. Similarly, the documentation and organisation of exhibitions involves a huge amount of paper for invitations, grant applications, press releases, catalogues and posters.
​
In two dimensional art practices, such as printing and painting, contemporary art simply would not exist without paper. How many of us have a small home library of books and journals such as Ceramics: Art and Perception? We line our homes and offices with masses of paper as if we are creating paper nests or cocoons.

Even when recycling paper into my paperclay, I could not keep up with the paper tide, so when a local paperclay became available for conventional clay prices I began to create paper sculptures. After stacking the paper I drilled, cut, carved, sanded and bound it. Following this experience, I began to see paperclay as a solid material that we can shape and refine into different forms before finally assembling the dried pieces into a completed work.

I also considered our local use of clay as a building material. Because of wood-eating white ants, most of our old buildings and modern houses are made from ceramic bricks. So along with the necessary paperwork these brick buildings shape how architecture is organised and presented. Consequently I began to make tiny paperclay bricks which, when dry, I joined together into organic forms. For me, these were more about creating internal spaces than external forms, that is, the public and private spaces in which we and art exist.
Ceramic art has a number of clearly defined schools of aesthetics arising from cultural influences and from the physical properties and limitations of the material. Paperclay enables the artist to use traditional ceramic building techniques as well as skills borrowed from elsewhere. Consequently the work can mimic many of the forms created in these materials.

However, we already have a tradition through ceramists: Henry Pimm (1980s), Richard Notkin and Adrian Saxe, who create ceramic objects which imitate wood or metal objects. The fundamental difference here is process rather than imitation, for paperclay enables us to easily create this type of work with some expertise. 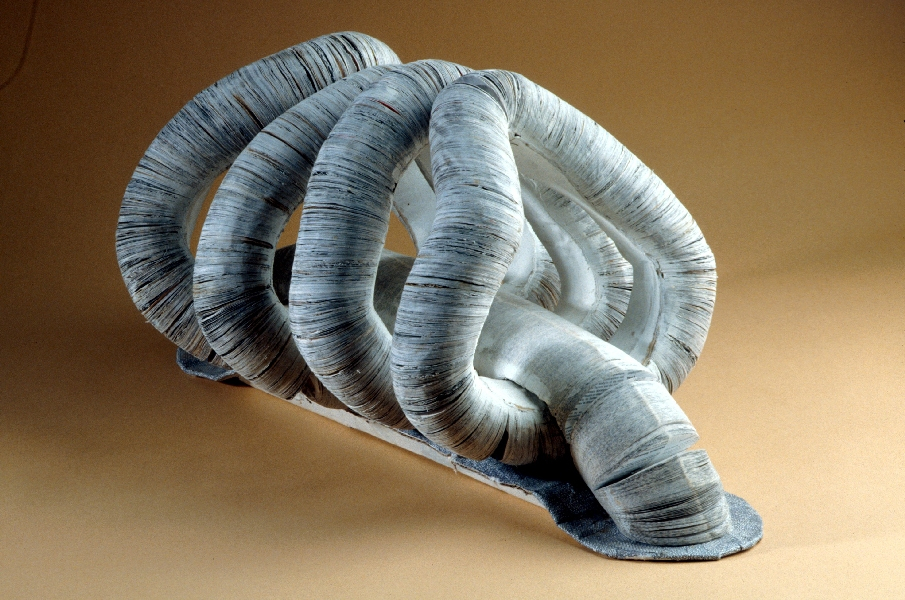 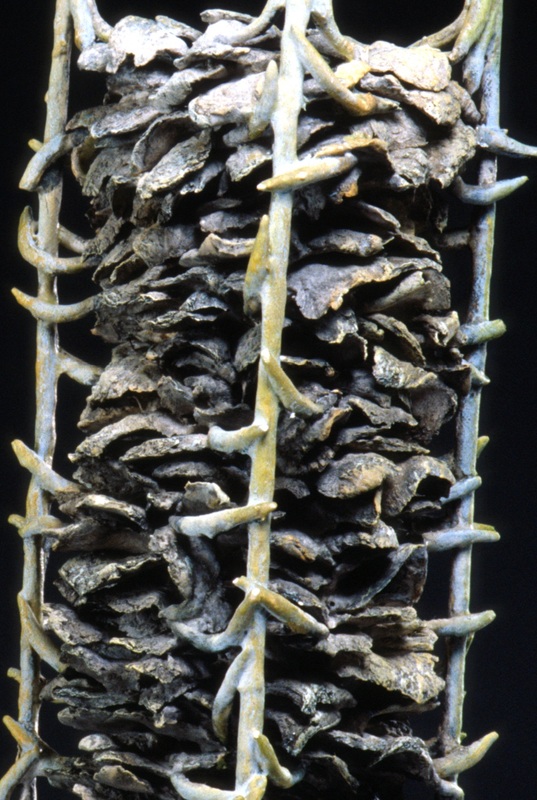 Stacked & Growing 1996 44 x 22 x 20 cm. Ceramic paperclay. Photograph: V. France.
This work illustrates day-to-dry walls built by dipping part of each piece in slip before gluing it in place.  For Stacked and Growing, I used fragments torn from a slab repeatedly thrown only on one side until expremely thin.  The surface texture emerges naturally as a result of the paper fibre in the paperclay.
If paperclay removes the clay skills necessary to create these illusions, does this necessarily alter the significance of these artworks and traditional ceramic skill hierarchies? Similarly, the increased spontaneity arising from the ability to stick together then pull apart and rejoin dry parts of paperclay art, opens up the possibility of artists making pieces, sending them unfired to other artists who might add to, subtract from, and modify the work before firing. This offers the possibility of physical transcultural exchanges in ceramic art – an 'Internet of Objects' rather than text or images. Delicate unfired pieces may be traded or shipped around the world, assembled and fired for exhibitions. The resulting reduction in insurance and freight costs may open up international exchanges in lighter and more delicate work.
As whole unfired works can be broken apart and reassembled again and again until a satisfactory result is achieved, for me the result of working in this way has fostered an even greater degree of irreverence to material traditions. The impact of this cumulative process is best illustrated when I find myself continuing to break off and add pieces to the work even after firing. Sometimes this involves adding unfired paperclay and refiring, or works are designed to have pieces broken off after firing. This may challenge the general perception that a broken work is damaged and devalued, but some potters find this irreverent attitude personally liberating in their own work.
​
By building with dry pieces and rods, the conventional vessel wall and illusion of mass may disappear. Viewer attention can be drawn away from the profile towards gaps in the wall and glimpses of its interior surface and space. This can be taken further in that the lines formed by the rods suspend or support themselves in space. It is as if the work is a three dimensional drawing in space, rather than the conventional painted lines of glaze on the surface of the vessel wall. That is, the 'lines' of clay have real mass rather than being merely an illusion of mass. Prior to paperclay, this effect required considerable skill in joining and drying this type of work; now the same effect can become quick and easy, as well as increasingly spontaneous.

Thus paperclay increases the number of ways of building in clay, increasing the visual vocabulary of ceramic artists and challenging them to become more irreverent about their own and others' work. It challenges established traditional ceramic skill hierarchies but, provided it is taught in an open manner, it may increase the appeal of ceramics as an artistic medium. Perhaps its greatest potential lies in its pre-fired strength and dry-to-dry joining. These properties suggest a number of new and real ways for ceramic artists to interact, regardless of distance.

Graham Hay is a ceramic artist from Western Australia. He welcomes contact from others interested in exchanges of objects and information.
Reproduced from Hay, G., (1996) More on Paper clay. Ceramics TECHNICAL, No.3, pp22-28 with permission from Janet Mansfield (editor).
More articles on paper clay