Over 2.2 ton (204 bags) of earthenware and terracotta paper clay were used by 13 local artists over the 6 weeks.

The  workshop was run by international artist Graham Hay.    17 sculptures were created for the Sunday 26 October 2008 Geraldton Blessing of the Fleet.

After the event, the collection of sculptures were all selected for and exhibited at the Geraldton Regional Art Gallery 20 November 2008 to 18 January 2009. 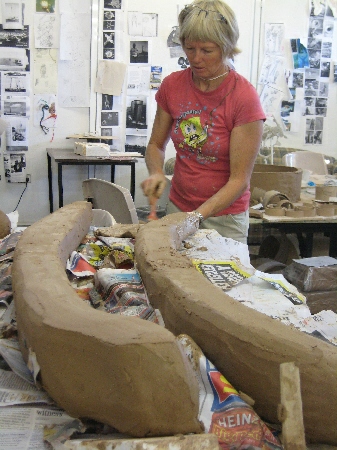 My large clay form is a portrayal of a cray like creature.

I wanted the viewer to feel that this thing would be very ungainly when it takes its first step.

The legs imbue strength and take on a perception of being part boat skeleton as well as part sea creature.

Everything about the ocean produces some kind of superpresence whether physically or emotionally, so my intention is to enlarge and enhance those feelings. 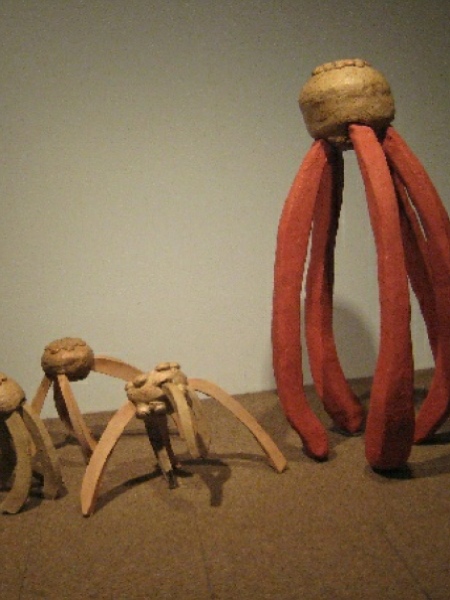 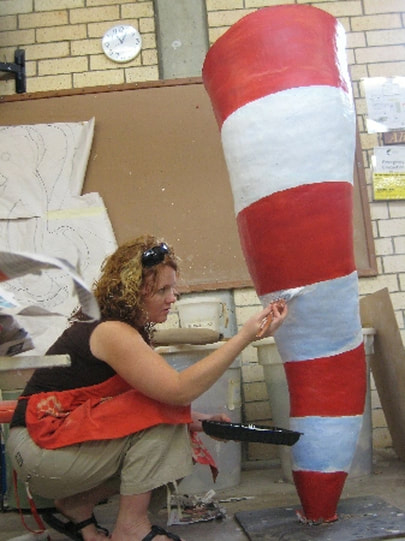 I have drawn inspiration from my local surroundings of Geraldton and the Abrolhos Islands. This is truly a unique part of the world and to create something just as unique and dynamic has been a process very worthwhile.

The unique properties of paperclay has allowed me to push the limitations of large dimensions and explore all the logistics of engineering, moving and firing something of this mass. I have been reinvigorated to investigate further possibilities of integrating my paintings and to complete more large works. 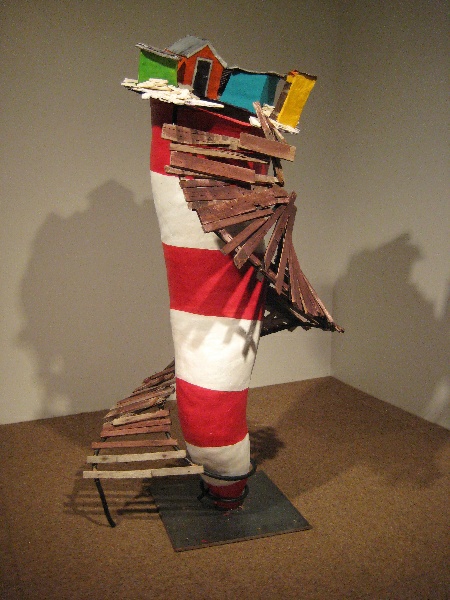 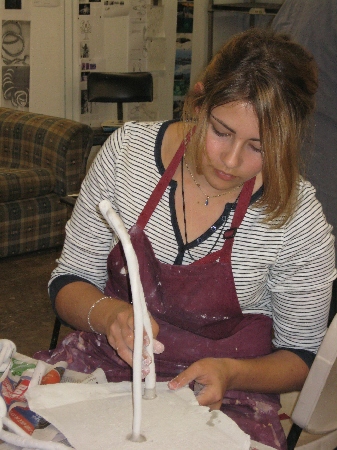 My inspiration for the blessing of the fleet sea sculptures came from my childhood fascination with the copious amounts of North West Blowfish which inhabit the oceans surrounding Geraldton. Their characteristics and mannerisms are what led me to my concept for my sea sculpture. My sculpture depicts a swarm of blowies all chasing after a fishing hook, as I wanted to show the frustrating aspects of their existence in a humorous light.

Working with paper clay has made it possible to create such a large sculpture in a relatively short amount of time, and for me to experiment with the boundaries of this medium. 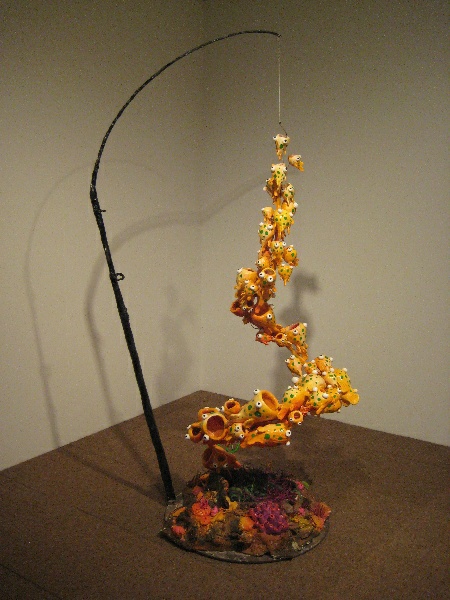 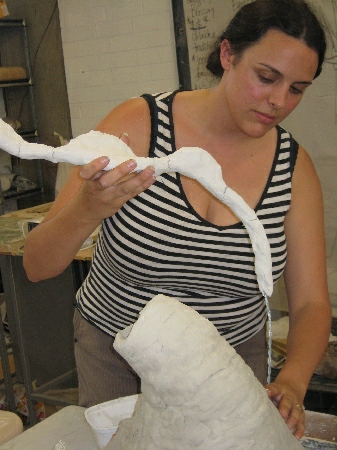 To be honest, this entire process has been a real learning curve and a challenge to me.

But having taught art myself, often to students coming out of their own comfort zones, it's good to be on the other side of the fence! And of course as artists it's always good to stretch ourselves creatively (even if it means trying to create a life-sized sculpture between two other exhibitions!) I found myself amazed at the versatility of paper clay; able to create compositions almost impossible with traditional clay.

I have chosen the sea dragon as my subject matter; an almost unbelievable, mythical creature which stirs my imagination with it's "other world-ness". I'm writing this artist statement before the project has actually been completed I'm excited to see how things will turn out. 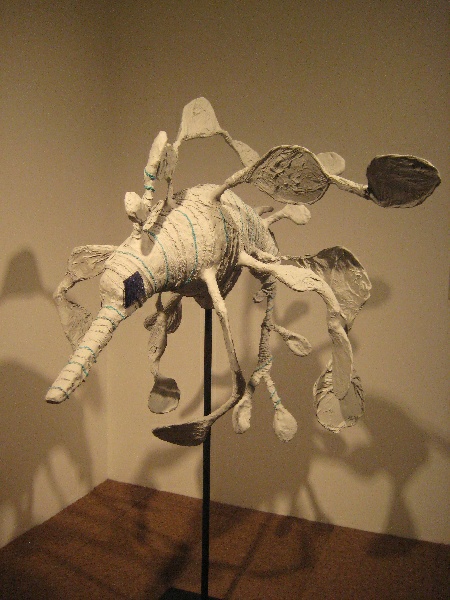 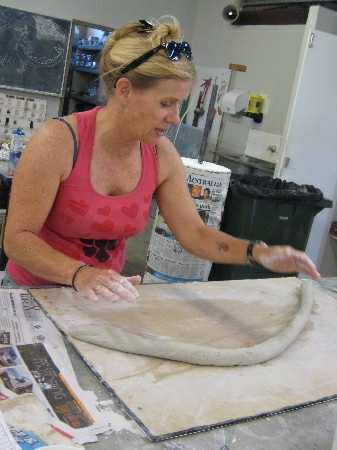 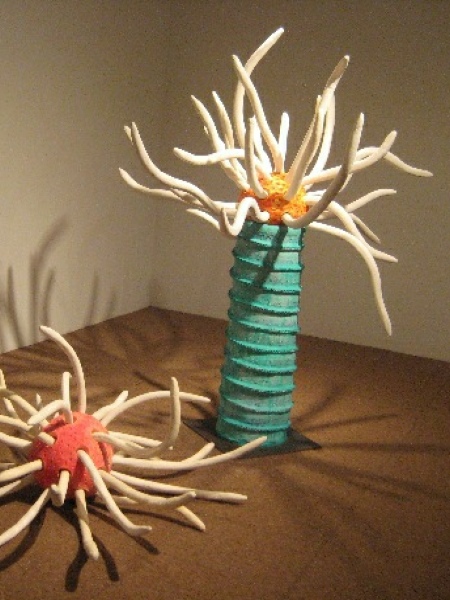 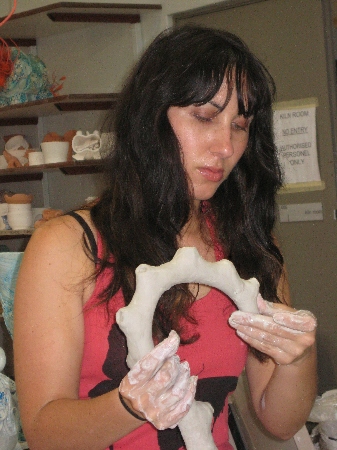 I find the squid to be a fascinating creature.

With slick white skin & sticky black ink, it's able to offer so much to the imagination.

Inspiring to myself as an artist, under appreciated by those who just see squid rings. 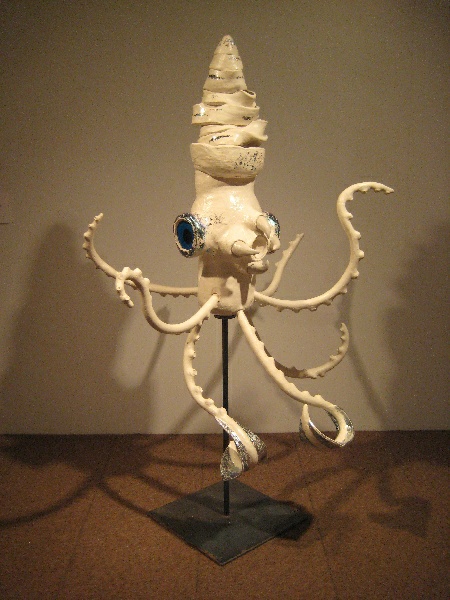 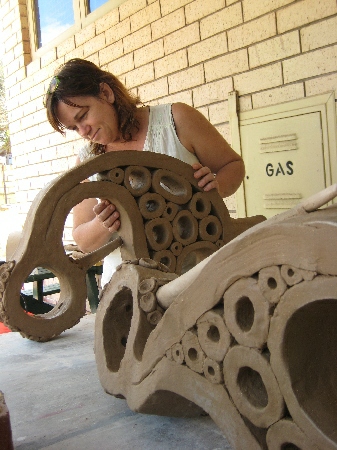 "Dance of the Diatoms"

Although I have a history with clay my genre of choice for the past few years has been jewellery, primarily silver and glass.

While working on a small intricate piece at my bench, and considering the subject matter for my sculpture the comparison of scale between the two media hit me.

Microscopic to gigantic, the unseen effect on existence!

Diatoms are microscopic aquatic organisms that have proven to be accurate tools for monitoring environmental conditions both past and present. They are unseen keepers of our environment and play a major role in controlling global warming by converting CO2.

"Dance of the Diatoms" represents the inseparable coexistence of every life and its fingerprint on our planet, regardless of size! 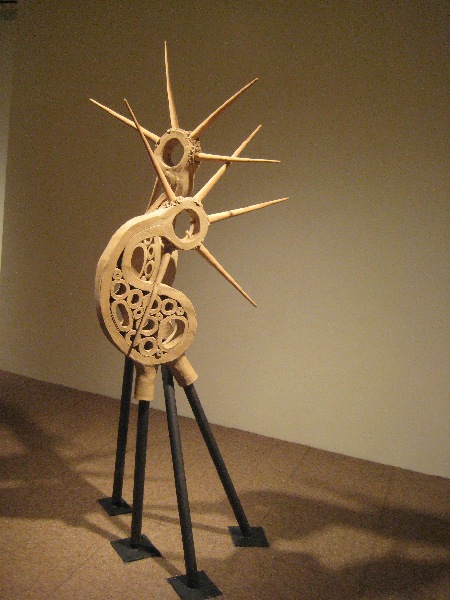 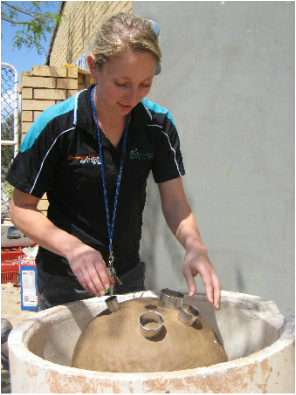 The abstracted form I have produced is inspired by my childhood memories and fascination with the beach.

As a child I spent every waking moment at the beach.

We would snorkel constantly, and I was always captivated by the marine life and its beauty.

My sculpture is an intensification of nature.

Through the process of taking from natural objects what is beautiful to me, and expanding those qualities to create a unique sculpture. 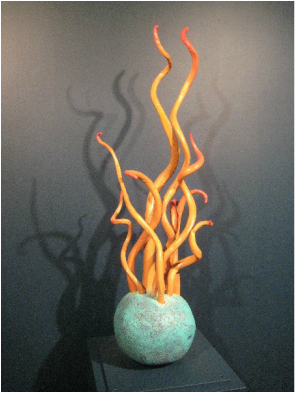 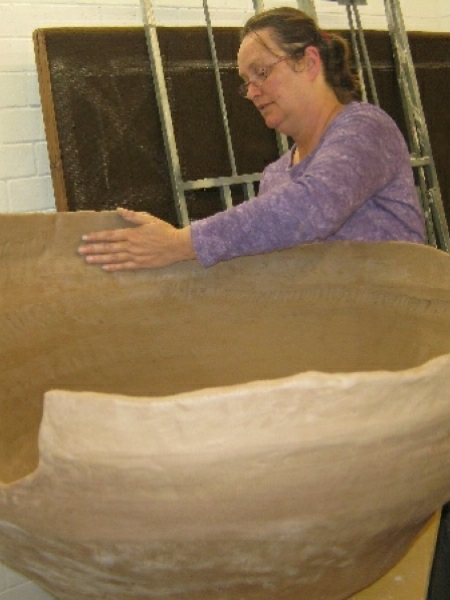 I have worked with traditional clay on the potting wheel, teaching students same.

I find that paperclay construction is amazingly different and much more versatile.

The possibilities are endless and I look forward to creating more intricate pieces in the future. 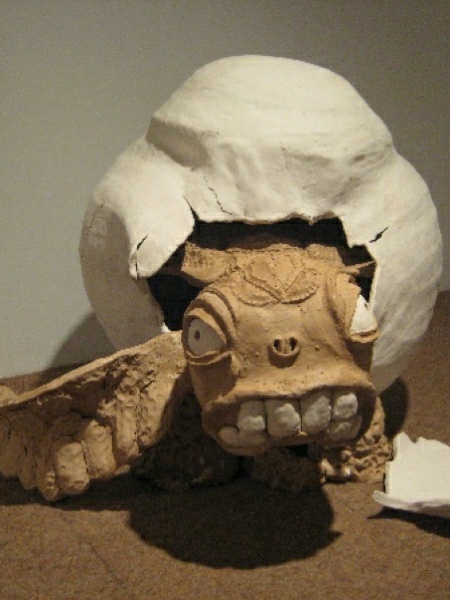 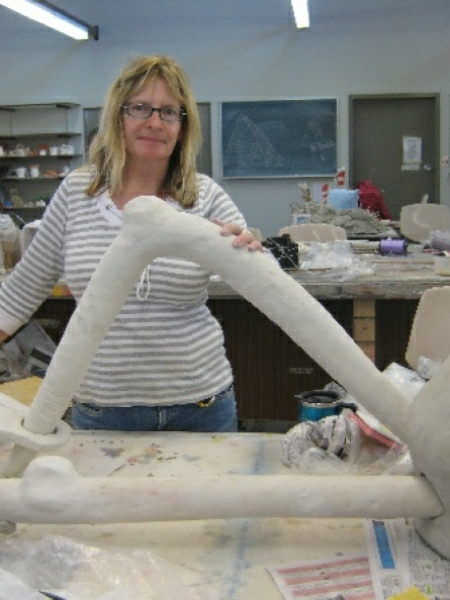 The challenge that Graham Hay set me in building a large sculpture was just that a challenge!

My inspiration is the ocean.

I want my piece to be fun, to put a smile on my face and also to make us think about the health of the ocean.

If we do not have healthy oceans my bird would not be sitting and smiling with a tummy full of fish.

My sculpture is made from Paper Clay, hand coiled and slabbed.

I love the feel of clay and the joy of creating from it. 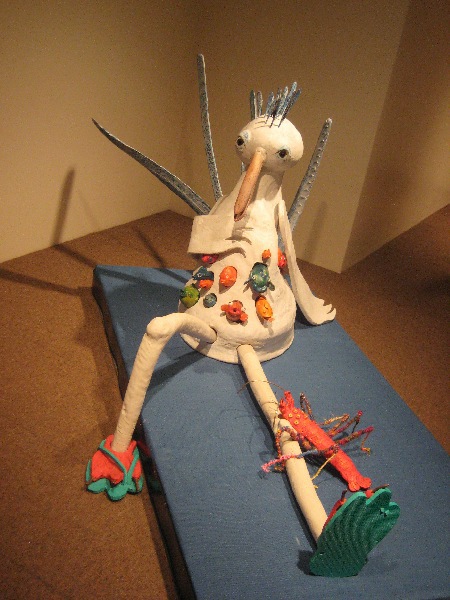 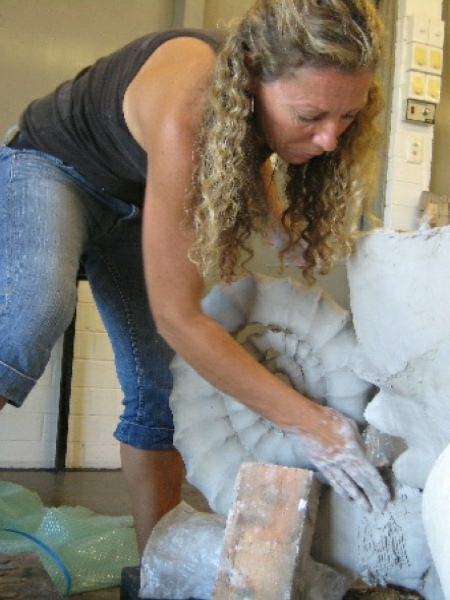 This work reflects my love of the ocean and its incredible creatures.

These nipple like structures relate to a pencil urchin that has lost its spikes known as a test, I found one many years ago on the shores of the Abrolhos Islands.

I have combined that with the amazing sea-horse whose life is often threatened through out the world.

Thousands are collected and dried alive for the tourist trade.

Many are captured from their beautiful habitats and taken home to aquariums , 1 in 10 survive, they are also highly prized for chinese herbal medicines. 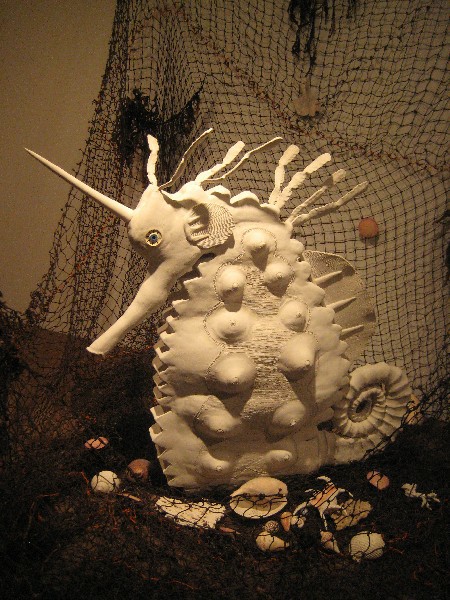 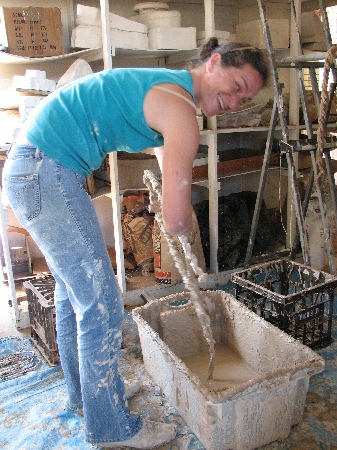 I wanted to make the most of the opportunity to work with Graham Hay by working with the contemporary construction techniques he has shown us.

I was inspired by the Human aspect of the Blessing of the Fleet, the ritual of the Blessing, and the reasons for which we ask for it, the struggle of the people, who battle the power of the sea, and ferocity of the elements, to reap the wealth of the ocean.

Offering faith in one another, and in faith itself, asking for Blessings of safety, courage, strength and success. 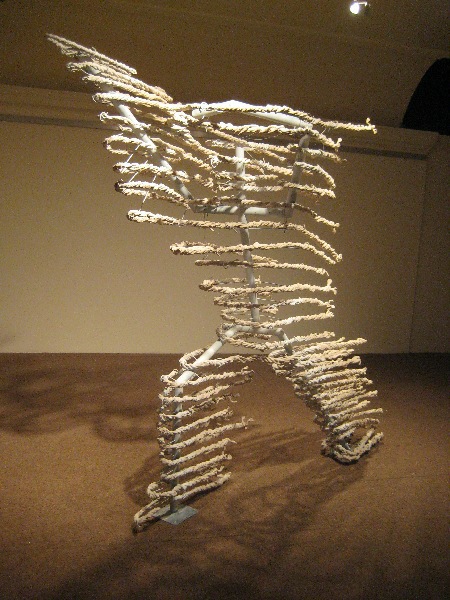 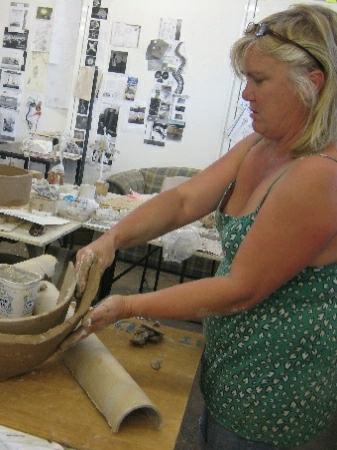 The paper clay has a beauty on its own and a unique quality of when dry being immensely strong.

This is what has helped inform the subject matter of my work.

By giving a metallic nature to my form it has presented the illusion of strength and protection against the elements in Geraldton.

One of these elements I have chosen to work with is the wind.

My sculpture represents movement. The piece I have created is an experiment. I have never worked 3 dimensionally on such a grand scale so my ideas show a naivety of knowledge of materials and as such I have created a sculpture which represents a polar opposite of the nature of the material.

Most of all though my work is about learning, the opportunity to make a life size sculptural form from paper clay presented itself and I have seized this opportunity to engage in the process.

My sculpture is the best attempt I can make at drawing sense from this whirlwind life. 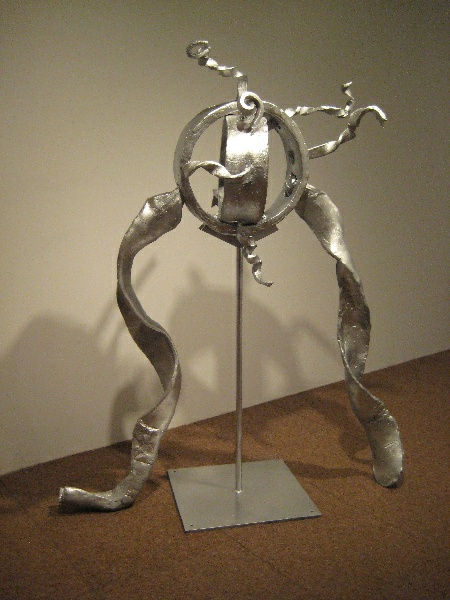 The project was initiated and organised by Annie Potter, Tourism & Events Coordinator at the Geraldton Fishermen's Co-operative Ltd.

Funded was provided by the Co-operative and Country Arts WA.

The Judges were Sonya Parmenter from ArtSource; Mark Leonard, Director of the Geraldton Regional Art Gallery, and the Sponsor of the prizes; Glenn Galipo, of Cargo Force International.

We would all like to thank "Don Felice" owner skipper Phil Miragliotta, who invited us all onto his boat for a tour of the habour and the Blessing.

view more pictures of the work at Photobucket .

Other workshops by Graham Hay